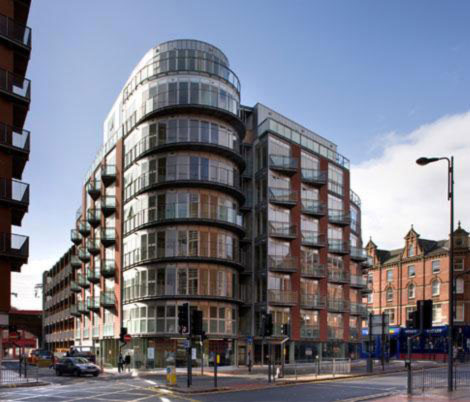 With such a huge amount of glass on its exterior The Iceworks could have been a rather cold and angular-looking structure. However because of its beautiful curved fa ade and warm terracotta tiling it has a very handsome air about it. This New York Street apartment block is a thoroughly modern development. And if its outer appearance does not make this clear enough then there are also plenty of reminders inside.

All 79 of its luxury apartments are finished to the very highest standard with full length windows and cool triangular balconies. But one of The Iceworks most futuristic features is it internal layout; rather than installing corridors to the apartments designers chose open air steel walkways. Not only do these look like they have been used in Blade Runner but they also mean that every apartment faces the busy main street outside.

Just to the south of the city s market this is a very nice location for such a contemporary development. The Iceworks is an extremely attractive building that keeps Leeds city centre bang up to date with the times